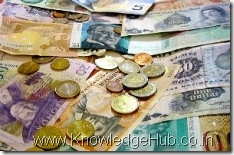 Apart from blogging I have one more hobby, currency collection. It is quite a fascinating hobby and one can acquire a lot of knowledge through it. Here I have compiled 8 interesting facts that I came across over a period of time.

1) When Pakistan was in its infancy after India-Pak separation in 1947, they used Indian currency with "Pakistan" stamped on it for the first few months till there was enough circulation of Pakistani notes. 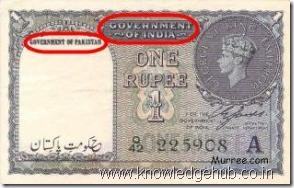 3) The widely used $ symbol, which is used to represent US Dollar, doesn’t appear on US currency at all. 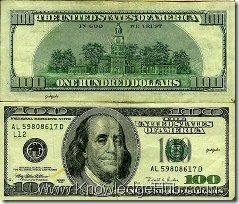 5) Bermuda’s $2 bill has been named the bank note of the year 2010 by International Bank Note Society for its attractiveness and high security features. You can read about it in detail at IBNS website.

6) Queen Elizabeth’s portrait has appeared on 33 different countries. Her image first appeared on the Canadian currency in 1935, when she was just 9 years old. The reason for her portrait being used by various countries is that the British monarch is considered as the head of the state by many countries that are a part of the British Commonwealth. This is why Australia and New Zealand have Union Jack on their Flag.

7) Australia introduced polymer notes in 1988 and in 1996 it became the first country in the world to have a complete series of polymer notes.

8) In India, Rupee one notes have signature of the Secretary, Ministry of Finance, Government of India, while the notes of Rs.2 and above denominations contain signature of the Governor, Reserve Bank of India.

BONUS FACT: There are only 5 currencies in the world that have unique symbol to represent them. These are US Dollar, Yen, Pound, Euro and Indian Rupee (latest addition). Of these only the pound sterling has its symbol printed on the notes.

Do you have some interesting facts related to currencies? Share it here.

Interested in FREE niche-specific articles for your blog? Looking for quality and unique articles for group discussions/assignments ? Visit our Services page for details.

43 Responses to 8 Interesting Facts about Currencies