Answers To The Quiz:

1) Connection between George Washington, Thomas Jefferson, Theodore Roosevelt and Abraham Lincoln:
These are the four US presidents whose face is carved on Mt. Rushmore (near South Dakota, USA).

2) Charles Darwin formulated his early Theory of Evolution in Galapagos Islands – a cluster of islands off the coast of Ecuador. The island had a rich variety of species, which helped him in his study.

4) The Postal Index Number Code System, known as the PIN Code system was introduced in India on the 15th of August, 1972- India’s Independence Day.

5) This has been described by Wisden as "one of the most undignified incidents in Test history". The people seen in the pic are- [Right] Javed Miandad (Pakistan batsman), [Center] Tony Crafter (umpire) and [Left] Dennis Lillee (Australian bowler). This clash between Miandad and Lillee, in which Miandad lost his cool and lifted his bat as if to strike Lillee, occurred during the first Test match at Perth in 1981. 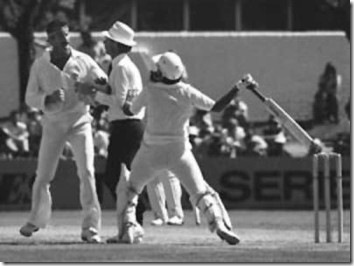 7) The Hindu- a major Indian newspaper, did not carry the news of Mahatma Gandhi’s assassination on its front page. Instead the page was full of advertisements, as per their policy at that time.

8) Uruguay, the winner of first FIFA world cup, did not participate in the second world cup, thus becoming the only country till date which did not defend its title. Find out why they did this in First FIFA World Cup-An Interesting Fact.

9) Belize’s flag shows two human beings (wood cutters- one holding axe and one holding a paddle) on it. (Thanks Rohit Kochar for the information).

Same with flag of British Virgin Islands.
Also check out Do Flags Ever Fascinate You? to read more interesting facts about flags.

To find more details about it, read the article Interesting Facts About T20 World Cup Theme Song-Conquest of Paradise.

12) Cockpit.
Belgium is known as the cockpit of Europe. The place where a pilot sits in an aero plane is called cockpit. Wondering why? Check the article ‘How Cockpit In Airplane Got Its Name’ to find it out.

13) Wrigley’s Juicy Fruit chewing gum was the first product with a bar-code that was scanned. It wasn’t specially designated to be the first scanned product. It just happened to be the first item lifted from the cart to be scanned. The pack of gum can be seen at the Smithsonian Institution’s National Museum of American History.

Read about other Interesting Facts.

14) Lebanon is the only Arab country without a desert.

How many of these did you know?

Paritosh got 9 out of 14 answers correct. Congratz!!

Thanks everyone for participating. We’ll soon have another round.