You are here: Home › Business Quizzing
By Anshul on June 21, 2011 in Interesting Facts 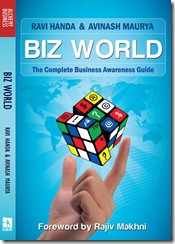 The other day I came across an interesting book on business awareness-Biz World. It is written by two of the Knowledge Hub readers- Mr. Ravi Handa and Mr. Avinash Maurya. As many of you voted to have book reviews as one of the categories on Knowledge Hub, I decided to review this book. However, after reading the book, I also felt the need to share some of the interesting facts that I found here.

So, I’ll do a detailed review of Biz World soon, but before that, let’s go through some of the facts that are interesting to know.

I have posted these facts in the form of a business quiz. You get +5 for every correct answer. Answer the questions, check it with the correct answers (scroll to the end, or click here) and post your score in the comments. Let’s see who wins!! We trust our readers, so no cheating!!

How much did you score? Ask your friends to compete with you by sharing this business quiz with them. Use the share buttons to the left.

You might also want to read about the meaning of some common brand names. Quiz Lovers should try their hands on this quiz.

You can read the summary of Biz World and buy it from here.

Subscribe to Knowledge Hub to read the detailed book review of Biz World, which will be published soon.