You are here: Home › Controversy Surrounding The Indian National Anthem
By Anshul on August 15, 2010 in Historical Facts, Interesting Facts 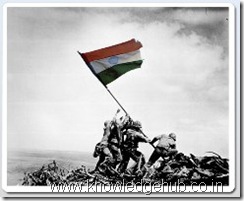 Happy Independence Day to all !!

Every year I start 15th August by standing proudly in attention to our National Anthem. This year is no exception. But today, apart from feeling proud, I am experiencing another feeling also- a feeling of sadness. I’m feeling sad because of the disrespect shown to our National Anthem by some of our fellow Indians, by forwarding hate mails against it. Though I hate to publish it on this blog, I consider it my duty to tell everyone what some people think of our National Anthem, and prove them wrong.

Since it is a long mail, you can read it here.

The mail claims that our National Anthem was composed not to show reverence to our motherland but to honor a British king!! I would have deleted the mail laughing at the ignorance of the sender, but unfortunately I couldn’t. Because me and my friends have received tens of such mails in past few days. Because all these mails were from the educated youth of the country. Because this leaves me thinking if our foundation is getting weak.

I, for one, firmly believe that our National Anthem stands for the pride and victory of India. But I won’t ask you to believe me. I’ll ask you to believe facts. Facts that you can verify after a few hours of research. Facts which should have been verified before sending this mail.

What Started This Controversy? 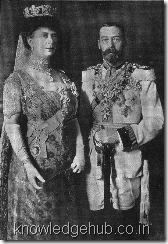 The seeds of this controversy were sown long back- in the year 1911. It was the year when King George V and Queen Mary visited India. Congress, which at that time was controlled by moderates, decided to felicitate the King in its annual conference, since he had announced the abrogation of the partition of Bengal.

For this purpose Rabindra Nath Tagore was approached and was requested to write a song to honor the King.

Rabindra Nath Tagore composed Jan Gan Man, which was sung for the first time on the second day of the conference- a day reserved to give a loyal welcome to King George V.

The English newspapers carried the following report about the event:

“The Bengali poet Babu Rabindranath Tagore sang a song composed by him specially to welcome the Emperor.“ (Statesman, Dec. 28, 1911)

“The proceedings began with the singing by Babu Rabindranath Tagore of a song specially composed by him in honour of the Emperor.“ (Englishman, Dec. 28, 1911)
“When the proceedings of the Indian National Congress began on Wednesday 27th December 1911, a Bengali song in welcome of the Emperor was sung. A resolution welcoming the Emperor and Empress was also adopted unanimously.“ (Indian, Dec. 29, 1911).

Doesn’t that prove that the song was sung in praise of King George V?

Before you form any conclusion, let me tell you that this is just one side of the story. Let us now see the other side of it.

News Report About the Event as reported in the Indian newspapers

“The proceedings of the Congress party session started with a prayer in Bengali to praise God (song of benediction). This was followed by a resolution expressing loyalty to King George V. Then another song was sung welcoming King George V.“ (Amrita Bazar Patrika , Dec.28,1911)

“The annual session of Congress began by singing a song composed by the great Bengali poet Babu Ravindranath Tagore. Then a resolution expressing loyalty to King George V was passed. A song paying a heartfelt homage to King George V was then sung by a group of boys and girls.“ (The Bengalee, Dec. 28, 1911).

Report of the annual session of the Indian National Congress

“On the first day of 28th annual session of the Congress, proceedings started after singing Vande Mataram. On the second day the work began after singing a patriotic song by Babu Ravindranath Tagore. Messages from well wishers were then read and a resolution was passed expressing loyalty to King George V. Afterwards the song composed for welcoming King George V and Queen Mary was sung.“

Other Small but Substantial proofs

1) A month after Jana Gana Mana was sung at the Congress session, a circular was issued by the Director of Public Instructions for East Bengal that banned Government servants from sending their children to Shantiniketan- a school run by Rabindra Nath Tagore. Doesn’t that prove that Rabindra Nath Tagore and the British were not best of friends?

2) In 1917, when Congress was controlled by the Extremists, Deshbandhu Chittaranjan Daas, a great patriot, said about the song, “It is a song for glory and victory of India.” Had it been sung to welcome the King, would he have ever said that?

On 10 November 1937, Tagore wrote a letter to Mr Pulin Bihari Sen [The letter written in Bengali can be found in Ravindrajivani (Tagore’s biography) by Prabhatkumar Mukherjee, volume II page 339.]:

“A certain high official in His Majesty’s service, who was also my friend, had requested that I write a song of felicitation towards the Emperor. The request simply amazed me. It caused a great stir in my heart. In response to that great mental turmoil, I pronounced the victory in Jana Gana Mana of that Bhagya Vidhata of India who has from age after age held steadfast the reins of India’s chariot through rise and fall, through the straight path and the curved. That Lord of Destiny, that Reader of the Collective Mind of India, that Perennial Guide, could never be George V, George VI, or any other George. Even my official friend understood this about the song. After all, even if his admiration for the crown was excessive, he was not lacking in simple common sense.”

“I should only insult myself if I cared to answer those who consider me capable of such unbounded stupidity as to sing in praise of George the Fourth or George the Fifth as the Eternal Charioteer leading the pilgrims on their journey through countless ages of the timeless history of mankind.” 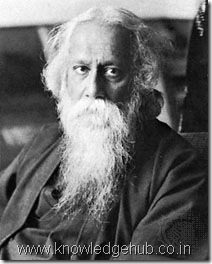 There must be some obvious questions lurking in your mind now:

Why did the English Newspapers give incorrect information about the event?

A possible reason for this could be that it was a result of the ineptness of the pro-British press, since they did not had the linguistic abilities to be accurate.

If it was not Jan-Gan-Man, which was the song sung in honor of the King?

Two songs were sung that day. The Jana Gana Mana was followed by a Hindi song composed by Pt. Rambhuj Chaudhary for King George V. This song can be found in the book ‘Our National Anthem’ by Rabindra Kumar Dasgupta published in 1993 by Manjula Bose, Tagore Research Institute, Kolkata.

Having proved beyond doubt that our National Anthem is indeed a song in praise of our motherland, let’s answer a few questions raised in the mail.

Whom does “Bharath Bhagya Vidhata” refer to?

The mail claims that Bharat Bhagya Vidhata is the King George V. They got this notion from the English translation of the National Anthem. But if you look at Tagore’s work you’ll find that the metaphor “King” represents God. This can be seen in his book “Gitanjali” (an offering of songs to the God):-

Poem #50: “I had gone a-begging from door to door in the village path when thy golden chariot appeared in the distance like a gorgeous dream and I wondered who was this King of all Kings!”

Poem #51: “The King has come- but where are lights, where are wreaths? Where is the throne to seat him?….. Open the doors, let the conch-shells be sounded!”

It is argued that “Ma” (in stanza 4 of the song- not a part of national anthem) refers to the Queen. This is incorrect. The word “Ma” has been used as a metaphor for the Motherland and not the Queen. Even in Amar Sonar Bangla, the national anthem of Bangladesh, Tagore has used the word “ma” and “mata” many times to refer to the motherland.

The original phrase “Nidrito Bharato Jaagey” (Sleeping India awakens) has been used by many nationalist poets to awaken the masses for revolution against British Imperialism.

Only provinces under British rule were added in the song

The mail claims that only the provinces which were under the British rule are mentioned in the song. None of the princely states – Kashmir, Rajasthan, Mysore etc-are present. Neither the Indian Ocean nor the Arabian Sea was included, as they were directly under Portuguese rule at that time.

The fact is that only the borders states of India were included to represent complete India. ‘Dravida’ represents the south, ‘Utkal’(Orissa) and ‘Banga’ marks the eastern border, ‘Sindh’, ‘Gujarat’ and ‘Maratha’ the western border and ‘Punjab’ represented the North. Even North-East, which was under British is not mentioned. Nor are rivers apart from Ganga and Yamuna, to keep the flow of the song.

There is another hoax mail doing rounds, which claims that our national anthem has been chosen as the best anthem by UNESCO. Read the facts here.

It is now up to you to decide what you want to do– believe the mail and forward it to your friends, or believe the facts and share it with everyone.

“Where the mind is without fear and the head is held high…
Into that heaven of freedom, my Father, let my country awake.”
-Rabindra Nath Tagore

Special Thanks:
This article could not have been written without the help of:

1) Sudhanshu Shekhawat, who first drew my attention towards this mail and motivated me to do a research on this topic.

Make Money From Imcrew-Scam or Legit?
Do Flags Ever Fascinate You…?