You are here: Home › First Man on Everest- A Controversy
By Anshul on December 29, 2009 in Historical Facts, Interesting Facts 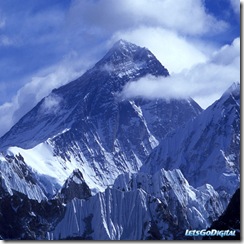 Yesterday I completed the book Paths of Glory by Jeffrey Archer. To give you an idea of the book I’ll quote from its back cover “Some people have dreams that are so outrageous that if they were to achieve them, their place in history would be guaranteed. Francis Drake, Robert Scott, Percy Fawcett, Charles Lindbergh, Amy Johnson, Sir Edmund Hillary and Neil Armstrong are among such individuals.
But what if one man had such a dream, and when he’d achieved it, there was no proof that he had fulfilled his ambition?
Paths of Glory is the story of such a man. But not until you’ve turned the last page of this extraordinary novel, will you be able to decide if George Mallory should be added to this list of legends, because if he were, another name would have to be removed.”

When I bought the book I thought it to be another fiction from Jeffrey Archer. But the very first page told me that it was based on a true story.
It is the story of George Leigh Mallory, who might be the first man, along with Sandy Irvine, to reach the summit of Mt. Everest, that too in 1924!!

After reading the book I decided to do a research on this- because we all have studied as a student that Sir Edmund Hillary and Sherpa Tenzing Norgay conquered Everest in 1953.

Also read How You Can Receive Birthday Greeting From The Queen – Another post inspired by Jeffrey Archer’s book.

George Mallory was an English man born in 1886. He was a natural climber right from his childhood who “climbed everything that was at all possible to climb”. He was the leader of first three British expeditions to climb Mt. Everest.

The first expedition took place in 1921, but was called off after one of the four climbers died of exhaustion and another was sent back due to exhaustion.

The next expedition was sent in 1922 and made to a height of 27,000 feet, higher than anyone had climbed anywhere at that time. They had to head for home due to bad weather which resulted in death of seven Sherpa.

Mallory was reluctant to go for the third expedition, since he had two young daughters, a son and a loving wife back home, but finally agreed to head the expedition. On June 8th 1924 he along with his climbing partner Sandy Irvine was last seen from below by one of the climbing team members, only a few hundred meters from the summit. But they never came back.

http://www.malloryexpedition.com/george.htm gives some valid reasons to believe that Mallory actually reached the summit:

1) When he started for the expedition he carried a photograph of his wife Ruth to place on the summit. When his body was discovered, the photograph was not found on him, leading experts to believe that he managed to reach the top. (In 1995, George Mallory’s grandson, George Mallory II, reached the summit of Mt. Everest. He then placed a photo of his grandparents at the summit after cutting a hole in the summit.)

2) He was also carrying snow goggles in his pocket which indicates that he had reached the summit and was descending after sunset when the goggles would no longer be required.

3) Various oxygen cylinders were found later near the summit and based on the amount of oxygen left, it can be believed that he reached the summit and was descending.

George Mallory and Sandy Irvine were carrying a camera with them to take photos after reaching the summit. Till date that camera has not been found. If only that camera could be located, the world can come to know whether George Mallory was the first person to reach Mt. Everest.

What are your views regarding this? Do you think George Mallory could have reached the summit?

12 Responses to First Man on Everest- A Controversy