You are here: Home › Indian Rupee Gets A New Symbol
By Anshul on July 15, 2010 in Useful Information

A few days back I told you that Indian rupee is soon going to have a new symbol. The D day has arrived. Decision has finally been taken and of the five symbols shortlisted, one symbol has been chosen to represent the Indian currency.

The symbol which has been designed by IIT post-graduate D Udaya Kumar, has

been  selected by a five member panel headed by Reserve Bank of India (RBI) deputy governor Usha Thorat, from among the five short-listed symbols. It has been approved by finance minister Mr. Pranab Mukherjee and has been recommended to Cabinet for approval.

The symbol is an amalgam of the Devanagari ‘Ra’ and the Roman capital ‘R’ without the stem, very much in line with what Finance Minister Pranab Mukherjee had in his budget speech this year- “We intend to formalise a symbol for the Indian rupee which reflects and captures Indian ethos and culture”. 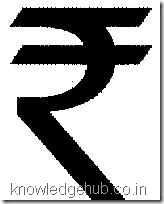 According to an official the symbol is based on the Tricolour and “arithmetic equivalence”. While the white space between the two horizontal lines gives the impression of the national flag with the Ashok Chakra, the two bold parallel lines stand for ‘equals to’, representing balance in the economy, both within and with other economies of the world.

The new symbol will not only provide the Indian rupee international recognition, in line with US Dollar, Euro , Yen and many other currencies across the world, but will also help distinguish it from the currencies of Nepal, Pakistan and Sri Lanka, all of which use the abbreviation ‘Rs’.

Kudos to D Uday Kumar who has entered the history books. He will be remembered forever for his contribution. He also wins the reward of Rs 2.5 lac.

I am waiting for the symbol to appear on coins and notes, but I think that will take some time.

UPDATE: The symbol will not be printed or embossed on currency notes or coins (Among currencies with distinctive identities, only the pound sterling has its symbol printed on the notes.)
It would be included in the ‘Unicode Standard’ and major scripts of the world to ensure that it is easily displayed and printed in the electronic and print media. Unicode is an international standard that allows text data to be interchanged globally without conflict.

The symbol will be adopted in a span of six months in the country, and within 18 to 24 months globally. It will feature on computer keyboards and softwares for worldwide use.
via: NDTV

Will the rebranding of the Indian Rupee help raise its image in the international market? What do you think?