You are here: Home › Indian Rupee To Have Unique Symbol
By Anshul on June 24, 2010 in Useful Information

I came across an interesting piece of news and decided to share it here.

India is soon going to join the group of countries like the US, Japan, UK etc which have a unique symbol for their currency.

During his Budget speech in Feb 2010, Finance Minister Pranab Mukherjee announced, “In the ensuing year, we intend to formalize a symbol for the Indian rupee, which reflects and captures the Indian ethos and culture”. In fact the contest to design a symbol was started in 2009 by the Finance Ministry of India. You can read the official notification here. (The contest has ended.)

What prompted this move?

Currently India is using abbreviations “Re” and “Rs” for its currency Rupee. These abbreviations are also used by Pakistan, Sri Lanka and Nepal for their currencies.

As the influence of Indian economy is growing in global market, it makes sense to have a unique identifier for its currency.

When will the symbol be decided?

According to news reports, the Cabinet might decide on the design on Thursday, 24th June 2010. Five designs have already been shortlisted: 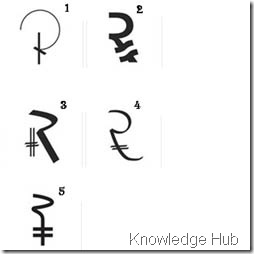 Once a symbol is approved, all the new notes will bear that design.

I am excited about this move, and can’t wait to see which design will finally make it on the Indian currency. While we are waiting for the Government to decide, let us know your preferred design from above. Mine is 4, since it is easy to write.

Update: The symbol has been finalized. Read about it here.