You are here: Home › Meaning Of Numbers At The Bottom Of A Cheque
By Anshul on February 16, 2010 in Banking and Finance 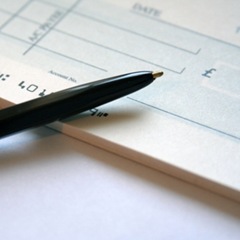 You must very often have used your cheque book to issue a cheque to someone, or better still have received it from someone. Apart from reading the amount (that’s the first thing we see :P) have you ever looked at other numbers written on the cheque? Ok, so you see account number and date but there are a few more numbers written (four sets of numbers to be precise) at the bottom of a cheque (see the pic below). Ever gave a thought to those? If you didn’t, read further to know what these numbers mean. 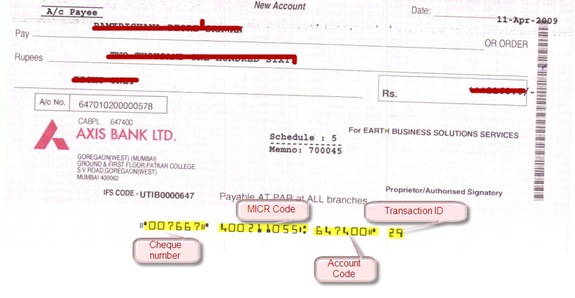 To be honest with you, even I had no idea what these numbers stand for, apart from the leftmost number which is the cheque number. Even googling about it didn’t help (you can find some information about MICR though.) So during my last visit to bank, I asked the branch manager about it, and he was kind enough to explain it to me in detail.

As I mentioned earlier, the first set of numbers represent the cheque number. It is a six digit number.

It stands for Magnetic Ink Character Recognition. This number helps a bank to recognize the bank and branch that issued the cheque. You might be thinking that this can be done just by looking at the cheque, but banks have to process hundreds of cheques daily. Going through each and every cheque is a cumbersome process. Instead, the cheques are sorted through a cheque reading machine which uses this number to identify the bank and branch a cheque belongs to. This makes the process faster.

The MICR number is a nine digit number, which consists of three parts-

For e.g., a bank in Hyderabad will have first three digits of MICR code as 500 (since PIN code for Hyderabad starts with 500)

b) Bank Code: The next three digits represent the bank code. Every bank has a unique code assigned to it. For e.g., ICICI bank’s code is 229, for HDFC it is 240 and so on.

Thus you can easily find which bank and branch a cheque belongs to by looking at its MICR number, and vice versa.

The third set of six digit numbers represents your account number (It consists of a few digits of your account number). But if you pick an old cheque book, issued probably before CBS (Core Banking Solution) was introduced, you won’t find this set of number present.

(Note: I am not completely sure of this. Branch Manager of the bank I visited told me this, and when I checked my ICICI cheque book, it tallied with my account number. If you see the sample cheque from Axis bank shown above, it matches there as well. But when I checked my HDFC account cheque book, I found this number and my account number to be different. If someone belongs to a banking background, or has some information about this, please tell others about it through your comments.)

Before ending this post I want to point your attention to another interesting thing. These numbers are written in a different font style with a special ink that contains magnetic material so that it can be recognized by Magnetic Character Ink Reader.

Don’t forget to find the meaning of numbers on debit/credit cards. You may also want to know the meaning of CRR, SLR, Repo and Reverse Repo rates. You can read about it here.