You are here: Home › Receive Birthday Greeting From The Queen
By Anshul on May 30, 2010 in Interesting Facts I was reading Jeffrey Archer’s latest book “And Thereby Hangs A Tail” when something caught my attention. The second story “The Queen’s Birthday Telegram” is a story of a man who receives birthday telegram from the Queen of UK when he reaches the age of 100. This left me wondering if such a thing really happens, so I looked around for information. And I found it to be true.

This is the second time I came to know about an important fact because of Jeffrey Archer’s book. From his last book “Paths of Glory”, I found the controversy behind the first man on Everest which I shared on this blog.

Coming to the topic, the official website of the British Monarchy www.royal.gov.uk has information about this important tradition that was started by King George V in 1917.

What is the tradition?

The Royal Household sends message to:

1) Individuals on their 100th and 105th birthdays and then every year thereafter.

2) Married couples on their Diamond (sixtieth), sixty-fifth and Platinum (seventieth) wedding anniversaries and then every year thereafter. 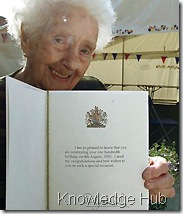 Earlier the congratulatory messages were sent as telegrams. From 1982, telegram was replaced by a special card with a personalized message inside. The cover image on the card is changed every five years to ensure that the card doesn’t look outdated, and those who are lucky enough to receive multiple cards do not get duplicates. The wording is also changed subtly so that recipients of more than one card do not receive exactly the same greeting again.

The text on the card is not made public to retain the element of surprise for those who have yet to receive their special greeting from the Royal Household.

Interesting Facts:
1) Queen Elizabeth-II’s signature has appeared on every card since 1999.

Why was the tradition started?

This tradition was started to highlight the fact that the individual has played an important part in the history of the United Kingdom, and also to make the special day even more special. After all not everyone achieves this landmark.

Which Countries can receive message from the Queen?

All the citizens of the Queen’s realm and those of UK’s overseas territory are entitled to receive message from her.

How to receive the message?

To receive the message, one needs to complete an application form and send it to Anniversaries Office, Buckingham Palace, London. For further details about application procedure visit the official page.

I wish we have something similar in India to recognize the citizens who have seen India bloom from its slavery days to an emerging superpower.

Isn’t it interesting to know the various traditions that countries follows? There is one such interesting tradition followed in USA- read Why Obama used 22 pens for a single signature to find about it.

Were you aware of this fact? Do you know someone who received the message from the queen? Share your views on this tradition through your comments. Remember Comments are Do-Follow