Yesterday I got a mail. Yeah, I know it’s not something to blog about. But it was the content of the mail that I found interesting and want to share with you.

Subject: ATM USE: This is a useful TIP …

WHEN A THIEF FORCES YOU TO TAKE MONEY FROM THE ATM, DO NOT ARGUE OR RESIST, YOU MIGHT NOT KNOW WHAT HE OR SHE MIGHT DO TO YOU.
WHAT YOU SHOULD DO IS TO PUNCH YOUR PIN IN THE REVERSE, i.e. IF YOUR PIN IS 1254, YOU PUNCH 4521.
THE MOMENT YOU PUNCH IN THE REVERSE, THE MONEY WILL COME OUT BUT WILL BE STUCK INTO THE MACHINE HALF WAY OUT AND IT WILL ALERT POLICE WITHOUT THE NOTICE OF THE THIEF.

EVERY ATM HAS IT; IT IS SPECIALLY MADE TO SIGNIFY DANGER AND HELP.

NOT EVERYONE IS AWARE OF THIS.
FORWARD THIS TO ALL YOUR FRIENDS AND THOSE YOU CARE FOR. 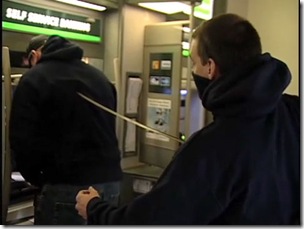 But think for a second: What would a person whose PIN is a palindrome number (which reads same both ways), such as 1441 or 2332, or who has all identical digits in PIN such as 2222, do? How will he alert the police? Or will the police come to “nab the robber” every time he uses his ATM?

Don’t worry. Police won’t come when that person punches his PIN in ATM. In fact police won’t ever come if you enter your PIN in reverse order. Not because our police is inefficient, but because such a system doesn’t exist.

However this rumor is not entirely baseless.

These rumors started because there were actually plans to implement such a system in ATMs (not in India but in US), where a user can enter some panic code to alert police. However it was never implemented because banks were against it. And they had valid reasons for that:

The better solution is therefore to equip ATMs with efficient security guards.

But there are certain things that can certainly happen if you enter the PIN in reverse order.

I am sure you’ll never want that to happen to your loved one. Why then forward such mails which might have serious consequences? Internet is a place where it is very easy to spread false information, and people in awe of the internet believes whatever it  throws at them. We, being educated and responsible citizens, should therefore refrain from forwarding such rumors.

So next time when you get such a mail think twice before forwarding it.

I’ll cover more hoax mails in the coming posts. So stay tuned in.

Have you ever received such hoax mails? Share such mails and your experience with us through comment form below.