You are here: Home › Nobility behind Nobel
By Ritu on October 4, 2010 in Historical Facts, Interesting Facts 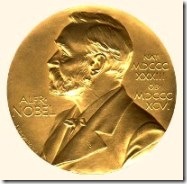 Everyone knows how famous the Nobel Prize is. But very less is known about how it all started. So while we wait for the announcements of other winners, let us see how the legacy began… 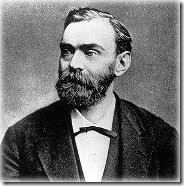 Alfred Nobel (October 21, 1833-Dec 10, 1896), who invented dynamite, was not only an inventor, but also a successful entrepreneur & an author. He was a master of six languages (Swedish, French, Russian, English, German and Italian). After inventing dynamite, he had set up around 93 factories in many countries of the world, had homes in six countries and held patents on 355 of his inventions. Workaholic that he was, in addition to his research works, he used to handle all his business related issues himself. Due to this he travelled far and wide. He said himself that

my home is where I work and I work everywhere.

At one point of time in his life, he had faced bankruptcy, and later with his sheer passion, he became one of the richest persons in the world.

But everything comes for a price.

Alfred Nobel was materially so accomplished but loneliness accompanied him all the time. All the years of success took a toll on his health and personal life. He remained under mental stress and suffered from ill health for most of his life. He started feeling old in his forties. Explosions in his factories, sometimes with many casualties brought him a bad name. Dynamite, his most important invention that he thought would end all wars was being used to kill more people than ever before. In a nutshell, he missed mental peace all his life.

By the time he realized that he did not have a family of his own, he was 43.He then advertised in a newspaper for a companion.

-said the advertisement. The most qualified applicant was an Austrian woman, Countess Bertha Kinsky. After working for a very short time for Nobel she returned to Austria to marry someone else. In spite of this Alfred Nobel and Bertha von Suttner remained friends and kept writing letters to each other for decades.

In 1888 Alfred’s brother Ludvig died while visiting Cannes and a French newspaper erroneously published Alfred’s obituary. It condemned him for his invention of dynamite. The obituary stated

The merchant of death is dead.

Dr. Alfred Nobel, who became rich by finding ways to kill more people faster than ever before, died yesterday.

This hurt him a lot. He dreaded to be remembered this way after his death. It is said that this brought him to the decision to donate all his fortune for the good of human race.

Birth of a Legacy

During the late autumn of 1895, he spent about two months in Paris, working on his will and drawing up guidelines on how his estate should be used. His famous will, dated November 27, 1895, was composed and written by Nobel without any legal assistance. It was signed at the Swedish-Norwegian Club in Paris, in the presence of four Swedish witnesses, none of them a lawyer. He never trusted lawyers. The contents of the will became his greatest "invention" – the Nobel Prize.

In his will he declared that the major part of his estate was to be converted into a fund and invested. The income from this investment was to be

in the fields of Physics, Chemistry, Literature, Medicine and Peace. His association with Bertha is said to have influenced him to include a prize for persons or organizations who promoted peace.

Technically, the prize awarded in Economics is not a Nobel Prize, as it was not specified in Alfred Nobel’s will. It was established by Sweden’s Central Bank in 1969, in his memory, and has been nicknamed the Nobel Memorial Prize in Economics.

One year after writing his will, he died alone without family or friends, surrounded only by his servants, leaving behind an unforgettable legacy.

The will came as shock for his relatives and a long dispute followed before the first prizes could finally be awarded in 1901- five years after his death.

Hence, the end of a life led to the birth of a story that continues to change the lives of many.

Nobel Prize Winners For The Year 2010

Do you know that Rabindra Nath Tagore, who won Nobel Prize for Literature in 1913, was given the knighthood by the British crown, which he later renounced in protest of Jallianwala massacre?

Below is the list of this year’s Nobel Prize winners. The award will be given on 10th December.

The list will be updated as the winners are announced.

Have Fun With Math
Why Is Nobel Peace Prize Given In Norway?