You are here: Home › What Gave Me A Shock!!
By Ritu on January 31, 2011 in Interesting Facts, Scientific Facts

For the past few days I was experiencing something strange but I wasn’t sharing it with anyone lest I should make a fool of myself. But the other day a colleague of mine asked me.. "Hey Ritu, do you feel shocks when you touch someone or the metallic boundaries of the cubicles?"

It happens more often in winter season. On touching a metal door knob or, for that matter any metal object, or also any other person, you feel a mild electric shock!

There began my research, which led me to this article.

What I, in fact many of us experience, is something called Static Shocks. It is interesting to know why it happens. And more interestingly why is it more noticeable in winter.

Going by the most general terms, whenever two bodies/objects come in contact, they get charged, i.e. one positive and the other negative. One gains electrons from the other and hence making itself negatively charged and leaving the other positive. Out of the two, which one will get positively charged and which one negative depends upon the position of the objects in the TRIBOELECTRIC SERIES. (The materials have a tendency to either gain or lose electrons. There is a list that has the materials arranged in a descending order of their tendency to gain electrons.) 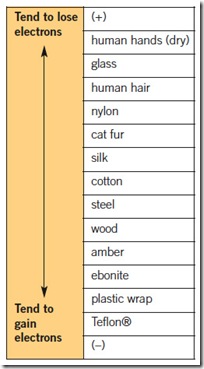 Rubbing the objects against each other enhances the charging process. It is the rule of nature to have a balance between positive and negative. Hence the two opposites tend to combine.

Why Are Static Shocks Common In Winter?

Static shocks are more common in winter. Let us find out the reason.

In winter, the air is generally dry, i.e. devoid of moisture. Dry air is conducive for static charges build up. If the air is very humid, the charge imbalance does not remain for long. The moisture in the humid air coats the surface of the material, providing a low-resistance path for electron flow. This path allows the charges to "recombine" and thus neutralize the charge imbalance. Likewise, if it is very dry, a charge can build up to extraordinary levels, up to tens of thousands of volts!

Apart from air humidity, the intensity of the shock also depends on the type of the sole of the shoes one is wearing, the floor on which one is walking, the material of the cloth one is wearing. Rubber shoes cause more shocks than leather shoes. Similarly nylon/polyester clothes result in more charge build up than cotton clothes. The reason is explained by triboelectric series.

Except for being a nuisance, these shocks are generally not harmful. 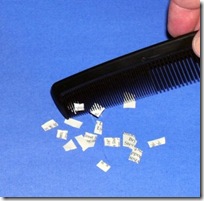 Some of you might already have done this simple experiment in schools. If not, try it now. All you need is a pair of scissors, tissue paper and a plastic comb.

Using scissors cut the tissue paper into small pieces. Rub the comb through your (dry) hair 10-15 times. Now hold the comb above the pieces of tissue paper.

The comb will pull up the paper pieces!!

Well that is no magic. The answer lies in the facts stated above- the comb gets statically charged on rubbing through hair, and thus pulls up paper pieces.

I really found it interesting to read about static shocks. Hope you also did.

Do you also experience static shocks in winter? Were you aware of the reason behind it?

5 Responses to What Gave Me A Shock!!